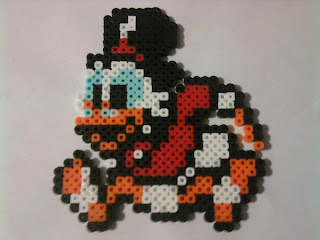 Is there anything that HEX can't do? Not only does he DJ for N3RD NIGHT, he  runs his own massive music festival called NERDAPALOOZA, not to mention he also manages to make time to make his own video game inspired art. What I love about his pearler beads is the fact that they are so detailed. They're like a large touchable screen capture of your favorite video games. His pearlers range from 8bit to 16bit and on the occasion he comes up with random mashups that are both surprising and extremely entertaining. You can't help but to smile when you see DC characters made to look like Mega Man bosses. Hex is extremely, and you can tell just by looking at his art, that this is a man who is very passionate about video games. 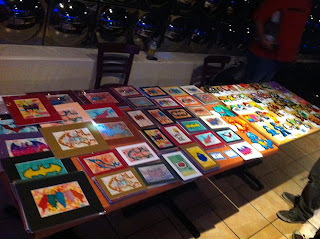 So how many times can the Batman logo be reproduced? This might seem like a rhetorical question, however if you've paid attention to pop culture within the last 30 years (or longer) you might noticed that logo has in fact been reproduced and plastered over everything you could imagine, turning it into something beyond just merely a comic book character. Michael Orr went the Andy Warhol path with his take on the logo, and the result is an amazing take on a cultural icon. Michael dissects, zooms into, splatters, and does various other things with the logo and plays with the cultural reproduction. Is it obsession or is it a commentary? Either way what he does is truly visually striking, you can tell that he puts a lot of work into what he does. Along with his Batman logos he also does his version of  some characters from Adventure Time and Teen Titans. If you get a chance check out his stuff!