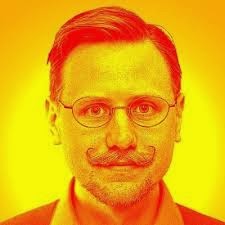 Even though his face or his name may not be familiar, Evan is responsible for reinventing how one thinks about Fringe and local theater in general. A master of graphic design, Evan took an extremely imaginative concept to the stage and it has erupted into a movement. Evan is one of the masterminds behind Dog Powered Robot, a cartoon network calibre presentation featuring large cardboard robots which interact with and entertain an enamored audience. Evan has taken this concept and ran with it, some "robots" have appeared at schools and various concerts. Dog powered robot is the kind imaginative whimsy which is distinctly orlando. While the robots and sets are made out of cardboard, the production quality is extremely high enough to rival anything kids watch these days. There's actually word that DPR is heading to cable television eventually. With acts like this one it's easy to see that imagination is alive and well in Orlando Florida.
Posted by FLART at 9:17 AM